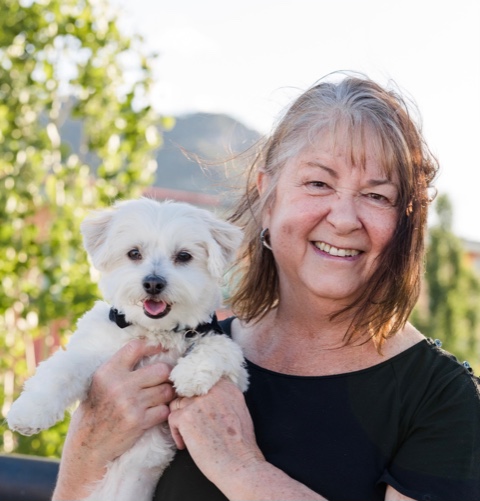 Not one to ever quit, she only left us when God gave her no other choice. With her loving husband and children at her side, Donna was taken from us on October 7, 2021.

Donna Jean Foss was born June 24, 1955, to John Edwin and Nona Mae Wolfinger Foss. She was the sixth born of nine children. At five pounds, ten ounces, and nineteen inches long, she was petite but long. She had her dad’s height and her Mom’s dark hair and eyes. Aunt Teenie would say Donna was her dad’s favorite. She loved growing up in a large family in Mahoney Acres. Some of her favorite memories were when she and her siblings would “borrow” flowers and garden vegetables from the neighbors. They also enjoyed sneaking into the drive-in from time to time. Donna’s life took a sad turn when the tight-knit Foss family lost their sister Marilyn Lee in a tragic accident. Brother Bill was severely injured in the same accident. Four years later, the family lost Nona to illness. Donna opted to care for her younger siblings as opposed to finishing high school.

Carrying yellow roses and white daisies, Donna married Christopher Harry Burrell on May 3, 1974. She gained twin daughters Coleena and Christina in their union. Chrissy remembers watching her comb her long dark hair, and Cleeny remembers Mom naming their favorite recipes after them. Donna enjoyed dressing the twins alike and putting their hair in pigtails to look like her.

Chris and Donna had Kima Lee in September of nineteen seventy-five. She would often take her to softball games when Donna played with family and friends. She played a tough third base. A talent she passed on to granddaughter Caroline, who became an all-state third baseman. Steven Harry came next. Donna loved his caring heart and his love of nature and the outdoors. He always made sure Mom was stocked with huckleberries and wild game. John Christopher was the baby. She loved his fun and tenacious personality and how he kept her on her toes. If she wasn’t careful, he would climb her plants or hide money and toys in Chris’s work boots at every opportunity. Mother-in-law Donna said Donna Jean was the best mother she has ever known.

Chris and Donna raised their three children in Libby until they graduated from high school. During that time, Donna completed her GED and also received her accounting degree. She was Little League President and oversaw the building of a large two-story concession stand for the program. Donna co-owned Collision Clinic and sold her share when she and Chris moved to Helena.

They moved to be close to Kyle and Kima and their grandchildren Cole, Caroline, Kaedin, and Kamrin. Steven and granddaughter Shelby joined the family there soon after. John moved his family to Helena, where it remained their base while he was enlisted in the Army and deployed multiple times. Donna was incredibly proud of John’s distinguished military service and the sacrifices he made for his family. She found great comfort in having Wyatt and Weston close during that challenging time. As the family grew, she gained granddaughters Emma and Abigail and grandson William. Then came daughter-in-law Jane and two more grandsons Jack and Joe. She felt blessed to have all her grandchildren in Helena, where they grew up close to each other. She was very proud of her newest role of GG to her great-grandchildren Rylee, Cash, and Walker. In Helena, Donna completed her second degree in Network Architecture. She worked several years for Glacier Bancorp. Inc. in the data center before moving to the Helena School District, where she remained until her passing. She loved her work and being close to the many students, coaches, and teachers she had come to know through her job at the May Butler Center and her grandchildren who attended school in the district.

Donna never missed an event or opportunity to celebrate special occasions or make you feel loved. Always the supportive sports mom and grandma, she attended every game and activity she possibly could. Donna’s family was her life and greatest achievement. She will look to Chris, her beloved husband of forty-seven years, to carry on this legacy.