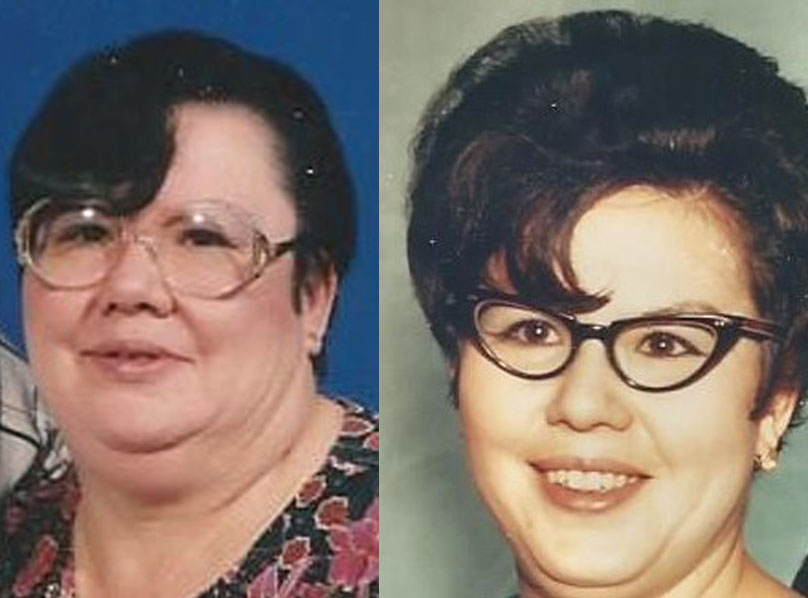 Patricia Fae McAlister passed away in her home on the morning of Friday, Sept. 6, 2019 after an extended illness. She was 75.

In early 1945, a young woman by the name of Emma Mae Talmadge Morgan boarded a passenger ship in Britain to begin a new life in the United States. Not long after her arrival in Morristown, NJ she became ill with cancer and on October 17, 1943 she gave birth, 3 months early, to a tiny baby girl she named Patricia. Emma died soon after, leaving Baby Patricia an orphan. There is very little known about her birth father other than he may have been British and may have been named Vince.

Luckily for Baby Patricia, a nurse’s aid for the “Baby Ward” named Louisa Christina Evans and her husband Winifred Lorring Evans couldn’t have children of their own and petitioned to adopt Patricia. According to the Morris County Children’s Home, adoption was finalized in 1945 and Baby Patricia became Patricia Fae Evans.

Patricia, or Patti, always knew of her adoption, but to her, Louise and “Winnie” were her only mom and daddy and she never wanted to learn more about her birth parents or their heritage.

In 1946, Louise and Winnie adopted another baby into the family. Patti loved her baby brother and doted on him from day one.

Patti’s most cherished childhood memories included traveling to NYC and climbing to the torch on the Statue of Liberty and also watching her mom perform one evening on The Lawrence Welk Show.

As a school girl, doctors suggested her family move to the Southwest Desert for Winnie’s health so they packed up and drove from NJ to Tucson, AZ. The hot dry climate helped, but Patti’s Daddy lost his battle with colon cancer when she was only 16.

Patti attended Rincon High School, which was brand new and her graduating class was the first to go through all 4 years. During her high school years, Patti was an avid swimmer and also worked for a large local department store as a model for their clothing and was allowed to keep all the shoes she modeled in. Even in her later years Patti always had numerous pairs of fancy shoes in her closet!

After her graduation in 1962, Patti tried to enlist into the U.S. Navy, but was turned away due to a previously diagnosed thyroid issue.

Determined to find a career, Patti enrolled into a local Tucson Beauty College and obtained her cosmetology license. She worked at several salons in the Tuscon area but also, looking to make a little bit more money, Patti began working as a Ward Secretary at Tucson Medical Center.

Patti met her future husband, a young Air Force Airman named Brett Alexander McAlister, on a blind double-date in 1964. On their next date, Brett, being gentlemanly, ordered egg drop soup for both of them,  not aware Patti was extremely allergic to eggs. Patty, not wanting to be a disappointment, ate the soup without a word and soon became very ill! Luckily for Brett, Patti was smitten with him and they married on April 3, 1965.

In 1966 Patty gave birth to a son, Johnathon; and a daughter, Michele, arrived in 1968. Also in 1968 Patti bought her own beauty shop and enjoyed the hard work and the people she met there.

In 1970, Brett received orders to move his family to Great Falls, MT. Patty sold her beauty shop and from that point on she only cut hair as a hobby all the way into her golden years.  Once in Great Falls, Patty was quickly employed once again as a Ward Secretary, this time for the old Columbus Hospital, where she quickly made many new friends.

Over the next 10 years, Patti worked at many different places, but she reminisced about her short stint at Weisman’s Hardware and Lumber, often recalling the “characters” she dealt with with a laugh and a sparkle in her eyes. Another favorite job was working for a credit bureau as a credit reporter.

Patti had a huge heart and a soft spot for kids needing help.  From 1973-1975 she and her husband fostered a series of kids through the Casey Program, but in 1975, her family moved onto Malmstrom Air Force Base and could no longer house foster children.

Throughout the 1970’s and 1980’s Patty kept busy with her own children, too, first by being a Cub Scout Den Mother and a Den Mother Coach, then later switching to a Brownie and Junior Girl Scout leader.

In 1980 the Armed Services did what they do best and moved Brett, Patty, and the kids half way across the continent to Chanute Air Force Base in Rantoul, Ill. Once again, Patty drew on previous work experience and quickly found employment at a local Credit Union, working “skip traces” for the loan department. Patti loved reading and watching mysteries and said this job was like working real life mysteries daily.

Not long after moving to Rantoul, Patti met her neighbor , Valerie, and they quickly became what they lovingly called “Sisters from different mothers”. This friendship lasted throughout the rest of Patti’s years.

Through Valerie, Patti discovered Beta Sigma Phi and found a group of ladies where she felt a true belonging, Although she stayed involved with the Girl Scouts, even volunteering with the local Girl Scout Council, Patti was happiest with her Beta Sisters.

Three short years later, Patti’s husband retired from the Air Force and the family moved back to Montana, but to Bozeman this time.

In 1986 Patti followed her husband one last time to Helena. Like everywhere else, she quickly found employment, but in a new field this time. She was hired on as the Night Security Desk Person at Carroll College’s Guadalupe Hall, which was an all girls dorm at that time. Patty became the 2nd mother to many young ladies and even a few young men, too, over the next 17 years.

A school rule at that time was all dorms had to be empty during holiday breaks. With many foreign students finding themselves without a place to go, Patti opened her house to one or two every year. This made holidays at her house interesting and lively from the mixing of cultures.

One special highlight of Patti’s time at Carroll College was the night of February 2, 1989.  Patti was working her normal shift when suddenly there was a large explosion breaking nearly every north facing window of the dormitory.  A runaway train had collided with another train near the college! The power was knocked out for an extended amount of time in a wide area around the college. Patti, although shaken, remained calm and knowing the temperature outside was -27 and the wind chill -40 she needed to quickly evacuate the young woman to a safe place. She told everyone she encountered to return to their room, grab a warm coat and a blanket, and gather around their RA’s in the main entrance. By the time everyone was accounted for, Patti knew where they were to go and gave instructions. By a miracle, nobody was seriously injured that night and many students thanked Patti for her calmness under pressure.

After declining health forced Patti into early retirement, she soon became bored and enrolled herself into Carroll. She graduated in 2003 with an Associates Degree in Visual Arts.

One to stay busy, Patti dabbled in many styles of arts and crafts. Many lucky people received gifts of her handiwork. They could have been cross stitch, crochet, macrame’, or paintings. She even taught many neighborhood kids the basics of drawing and she sewed many of her own clothes.  After her retirement, Patti even made a little spare money by making Patti’s Prairie Dolls and, combined with a short pioneer story she wrote, sold them in the Montana Historical Society’s bookstore.

Patti enjoyed and looked forward to any time she could spend with her grown children and grandchildren. She was thrilled when her great-grandson was born in 2007 and welcomed a step-great-granddaughter into her family with love and excitement.

She was known to everyone in the family as “The Keeper of the Dates” because she always knew when everyone’s birthday or anniversary was, and she always sent a card. These cards will be missed by us all.

Patricia was preceded in death by her mother and father Louisa Christina and Winifred Lorring Evans, her step father Charles Everett Lund, and her brother William Henry Evans, III.

Patti is also survived by many close  friends who became de facto family and helped comfort her during her final years, including but not limited to Valerie Conley, Debbie Allen, Sherri Steele, Vicki Larson, Mikala Martinelli, and Nichole George.

Whether you knew Patricia as Patsy, Pat, or Patti, your life was touched by her generosity, understanding, tolerance, open-mindedness, forgiveness, and above all, her undying unconditional love.

Her laughter was infectious and she made friends quickly.  Patti will be missed dearly here on Earth, but the Angels now have a new member in their midst.

Patti never liked being the center of attention so per her wishes a small private Celebration of Life was held Sept. 12, 2019. Her family will have a Scattering Ashes Ceremony at her favorite camping spot along the South Fork of the Judith River at a later date. Please visit below to offer the family a condolence or share a memory of Patti.