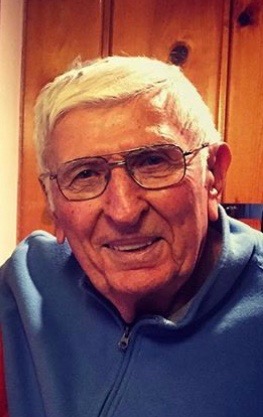 Peter Tyanich, Beloved father and grandfather passed away Friday, May 29th, 7 months to the day that he lost his wife and soulmate of 68 years. Peter was born September 8, 1928 to Milica and Gligor Tyanich at the family farm east of Helena. His parents emigrated from Montenegro in 1911, raising their family of 10 children first in Butte and then in Helena. Pete attended East Helena and Helena schools and joined the Army immediately after graduating from high school. He trained at Fort Lewis and was sent to Japan where he served as part of the Occupation Army until December 1947, when he returned to Helena.

Peter made the military his career, serving as the US Property and Fiscal Officer for the Montana National Guard and Air Guard, retiring as an Army Colonel in 1982. He thoroughly enjoyed the many friends and associates he had during his 33-year military career. Although he appreciated meeting and working with many generals and governors over the years, his favorite times were spent with his big, extended family and his life long friend, Spencer Russell. Pete specially enjoyed hunting and fishing and being at the family cabins near Lincoln. He referred to those times and that place as “magic”.

Peter played the guitar and used to sing and play with his brothers at family gatherings and parties. He was a golfer and belonged to and served on the board of the Green Meadow Country Club. Peter was also a third-degree Mason, and he was a participant with his family at St. John’s Lutheran Church.

The love of Pete’s life was his wife, Pat. He married Patricia Ann Wooten, October 20, 1951 in a service at his parent’s home. Pete was raised Serbian Orthodox, Pat was raised Mormon, they were married by an Episcopalian priest and raised their family Lutheran. They had two daughters, Nancy Tyanich of the family home in Helena, and Leslie (John) Moran of Missoula. Pat passed on October 29, 2019, after a difficult battle with Parkinson’s disease, and this shattered Pete’s heart. He struggled on as long as he could but finally just wore out. His daughters survive him, as well as grandchildren Megan, Molly and Peter and many dearly loved nieces and nephews and families.

Peter’s passing was the end of an era, as he was the youngest and last of his big loving Serbian family to leave. Preceding him in death were his parents and his siblings and their spouses; Vee and Howard Walden, Ange and Tom Miskovich, Helena and Al Milholland, Rod and Marge Tyanich, Mary and Bob Olson, Jo and Mike Kovich, Zorka and Max DaSilva and Dan and Alice Tyanich, as well as a series of Siamese cats named “Vuk”.

Peter lived life big. Everything he did and felt and said was big. His laugh was big and he always lived life at full throttle. He was deeply loved and the hole he leaves in our hearts is big, too.

Private family services are planned. A public graveside service for Peter and his wife Patricia with military honors will be held on June 11, 2020, at 3 p.m., at Forestvale cemetery in Helena. In lieu of flowers memorials may be sent to Helena Food Share or a donor’s choice.