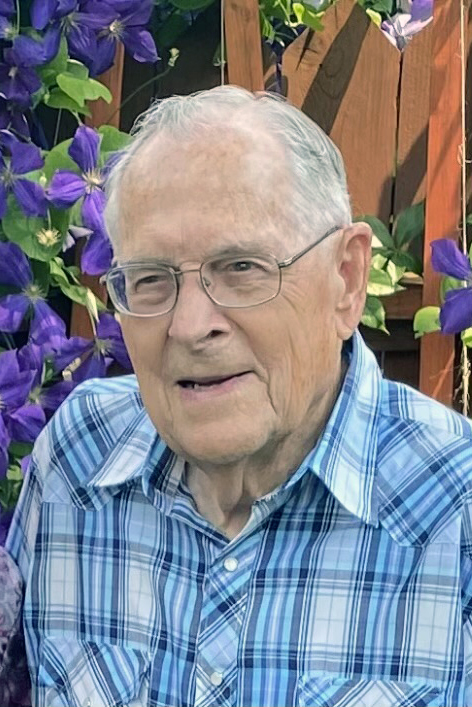 William E. Bisom, Helena, Montana, took his final walk with Saint Peter on September 15, 2022, after saying farewell in the company of his loving family.

William (Bill) Edward Bisom was born July 20, 1927, to Earl Bisom and Leoise La France Bisom in Rolla, North Dakota, and grew up on the family horse powered farm with no indoor plumbing. His mother died when he was seven years old, and his older sisters and father were left to raise him and his younger brothers and sisters. When Bill was 15 years old, he struck out on his own and moved into town taking a job at the Vendome Hotel, where he tended bar and received room & board plus a weekly wage of $5. In high school he played basketball for the Rolla High School team, and basketball remained his lifelong favorite sport. In later years, he was a star pitcher in local league Fast Pitch Softball, which he avidly played for 20 years.

At the age of 17, he joined the US Navy in April 1945, and after boot camp was dispatched to Yokosuka, Japan to serve in the US Occupation Force as a “Sea-Bee” in the Construction Battalion. After being honorably discharged from the Navy, he attended Minot State Teachers College in Minot, North Dakota. He later transferred to Seattle University in Washington State, where he met Barbara Peiton from Havre, Montana. They were married in Havre on June 12, 1950. He went to work for F. A. Buttrey Co. in Cut Bank, Montana, and later managed the F. A. Buttrey Furniture Store in Glasgow, Montana.

In the fall of 1956, Bill & Barbara moved to Helena, Montana, and opened the Marshall Wells Hardware Store in the Hustad Shopping Center. In 1966 they decided to sell the hardware business in large part because of competition from the influx of big box stores in the Helena area.

After selling the hardware business, Bill was hired by Monsignor Brown, President of Carroll College, as Manager of the college’s Business Office and Chief Purchasing Agent, positions he held for 18 years. Upon retiring from Carroll, he sold real estate part-time for 3 years. During his retirement years he was active in thoroughbred horse racing for 15 years, owning and racing horses in Montana and Spokane, WA. He had a great appreciation for both kinds of music: Country and Western.

Since moving to Helena, Bill and Barbara have been active members of the St. Mary Catholic Church and helped with fundraising for the new St. Mary church, which was built in the 1970’s.

Bill is survived by his wife of 72 years, Barbara, and their seven-children: Michele (Tim) Hunter, Cathy, Mark, Jody (Jeff) Brandt, Dan, Paul (Betty), and Amy (JV) Moody. They are also blessed with 15 grandchildren, Dillon, Cory & Heidi, Casey (deceased), Shayla, James & Alyssa, Tom & Mike, Ashley & Madison, Chris & Manda and Greg & Stephen. Bill & Barbara are also blessed with 19 great-grandchildren and 1 great great-grandchild.  His proudest achievement in life was his seven children who all graduated from college, five of them from Carroll College.

Bill came from a family of 10 children, five sisters and four brothers, who all preceded him in death, ranging from Helen at age three to Herman who died in the spring of 2022 at the age of 97.

A private family service due to Covid precautions will be held at St. Mary Catholic Church, followed by Internment with full Military Honors at Resurrection Cemetery in Helena. In lieu of flowers, Bill’s family asks that donations be made in his memory to St Mary Catholic Church or Carroll College.